The Morrison Government’s federal budget measures will do little to make workplaces safe and secure for women workers in Queensland. Their 2021 Budget spend is splashy and big, but out of touch with the real world of many working women.

It’s a basic principle that working women should be safe and respected at work. Yet four in every ten women say they’ve been sexually harassed in their workplaces, many who are young workers or are in insecure work and are afraid to speak up for fear of losing their job.

On this point, the Government remains uncommitted to key recommendations from the Respect@Work Report on Sexual Harassment, which are needed to drive change and prevent harassment in workplaces.

And almost unbelievably, the Government has demonstrated its ignorance on these matters by providing $9.3 million in funding to federal departments in Canberra for committees and the development of online training. Compare this with the paltry $200,000 to be spread across all Working Women’s Centres throughout Australia, which are tasked with responding to sexual harassment inquiries and complaints.

Insecure work is rising. With almost one quarter of women employed as casuals, many part- timers, this group is more likely to be low paid without access to the hours they need to work to make a decent living. Consider for a moment how hard it must be for nurses and assistants in aged care homes, locked into nine hour per fortnight employment contracts.

Productivity is also expected to grow as the economy rebounds, yet wage growth forecasts are negative or flat, cementing the decline in living standards for years ahead. Workers have had no real pay rise during the federal Coalition’s time in government. Now employment growth in the Budget is predicated on the introduction of more low-paid part-time casual work.

With so much precarious work, many women workers continue to have limited access to stable long-term affordable housing, with the Budget announcement of a Government guarantee of 18 per cent of a house deposit for many single working parents simply ‘a pie in the sky’ promise.

Being locked out of renting or owning your own home is a very real possibility for many older working women nearing retirement, with a yawning 30 per cent gap in average superannuation payouts compared to men, and the average Queensland female worker having almost $55,000 less super at retirement.

The gap between men and women in superannuation is even greater in some areas of Queensland, approaching 50 per cent on the Gold Coast, Sunshine Coast and Central Queensland, with the lowest median balance for retiring women in the state being $88,400 on the Sunshine Coast.

Here, the Morrison Government has missed an important opportunity to change the lives of many working women by refusing to pay superannuation on its own parental leave scheme, or to consider mandating employers to do the same. This is an instant practical measure that could reduce the super gap.

And while additional funding has been provided for women fleeing violence in their homes, a reform overdue but welcomed, the Coalition demonstrates its disconnect with women in work by ignoring the need for paid family and domestic violence leave to help support women and their children.

Many working women and families are also impacted by unaffordable and rising childcare costs. While the new childcare package is welcomed, single child families who comprise the vast bulk of working families, remain the biggest losers with no additional changes. Significantly, funding will also not flow to families until July 2022.

It’s a big spending budget but too much of the money is in the wrong place or inaccessible because it’s out of touch with real lives. Structural reform of our labour market is urgently required to limit casual and insecure work and to focus on growing secure decent paying work. Only then will all workers be able to share equally in the post pandemic boom.

This year’s March4Justice rallies across Queensland and Australia showed how much we all believe governments need to stand up for working women.

It’s time that all politicians realised working women deserve safe and secure work and put their Budget where their mouth is.

Turnbull protecting penalty rates would be a ‘Christmas miracle’

A promise to protect current penalty rates would be the most useful guarantee the Turnbull LNP... 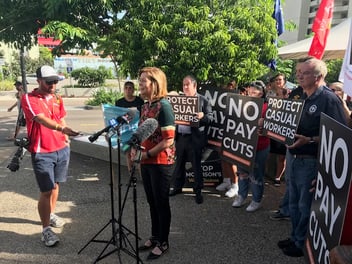