Workers and community members in Caboolture and Moreton Bay North met last week to address the insecure work crisis in a region where labour hire levels are above the national average. 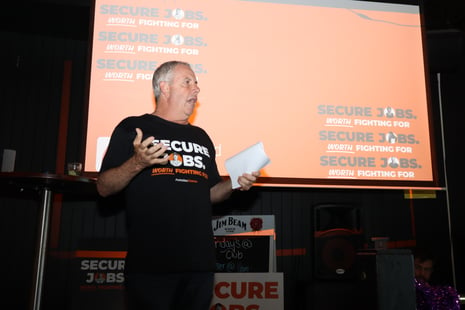 A town hall forum on 2 December at the Club Tavern provided workers with an opportunity to learn more about combatting the crisis, which affects one in four workers. These are workers in casual work, labour hire or other insecure employment like gig work and who do not have paid leave or entitlements.
Queensland Council of Unions General Secretary Michael Clifford - pictured - said ACTU analysis showed that in Moreton Bay North region around 6.7 per cent of workers got their jobs through labour hire, which was far greater than the national rate of 4.6 per cent.
Australian Bureau of Statistics figures from August 2020 showed that more than 6500 workers in Moreton Bay North had been in labour hire.
“Whether it's labour hire that underpays for the same job, casualised jobs with less rights, part-time work without meaningful guaranteed hours, or years of low pay growth, insecure work is a serious problem for our community,” Mr Clifford said.
In Moreton Bay North, a union analysis has found that more than 23 per cent of workers – almost one in four – are in insecure work.
“People with insecure work can’t plan their lives, struggle to pay their rent or mortgages and worry if they’ll have enough to pay the weekly bills,” he said.
Sunshine Coast electrician Rob Smith was one of those workers on labour hire – in employment but unable to plan his financial future or take leave if needed to spend with his family.
“Some firms were like ‘if you take leave you’re gone’ so I’d be out of a job,” he said.
“That makes it really hard to maintain family relationships – it was a very stressful time. While I was earning a good wage as a casual, I still could not refinance my home loan. Even my own bank wouldn’t take the chance on my insecure work and would not let me change my finance arrangements,” he said.
Mr Clifford said the town hall forum would hear from Labor leader Anthony Albanese, ACTU President Michele O’Neil, and workers and other union leaders about how Australia can address the insecure work crisis.
“Insecure work hurts all of us. Workers in insecure work and on low pay can’t support their community and local businesses,” he said.

Morrison right to pursue those who don’t pay tax – but is looking in the wrong place.

This letter to the editor was sent to the Courier-Mail on Thursday 25 August 2016.

New wage calculator shows if you are being ripped off.

Are you being paid the right amount for the work you are doing?