The Queensland Council of Unions welcomes the passing of new laws today in the Queensland Parliament which have important gender equity and parental leave improvements, and consumer law protections for Queensland workers.

These are important nation leading reforms that arose from the 2020 Sex Discrimination Commissioner’s Respect@Work Report that found that two in five women, and one in four men had been sexually harassed at some stage in the prior five years at work. The same Report also found that female workers were being excluded from some workplaces because of their sex or gender, and that young and more vulnerable workers were more likely to experience harassment because they were women.

The new laws include requirements for parties to address pay equity during bargaining, with Queensland women continuing to earn on average 15.8 per cent or $276.80 per week less than men across all industries.

Parental leave entitlements have been updated to allow families to make choices that suit their individual needs when taking leave and caring for children, such as allowing partners to take concurrent leave within the first year of the child’s life, leave where a child is stillborn, or to enable parents to take adoption or cultural leave up until a child is aged sixteen, better reflecting community options in particular for bereaved children or children in long term foster care.

Ms King said “These reforms are about enabling families to have more choices and remove limitations in the law that recognised only women as primary caregivers”.
There are also strong new consumer law protections to prevent workers from being misled or misrepresented by associations advertising for and taking member fees for matters they are unable to legally offer.

“We already have strong Australian consumer law protections against misleading and deceptive conduct, but these laws will enable action to be taken before the Queensland Industrial Relations Commission which is a low cost, more accessible and work-related jurisdiction compared with the more expensive and litigious Federal Court”, Ms King said. 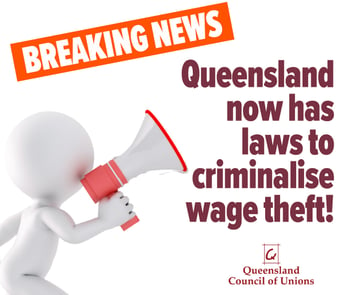 Deliberate wage theft will now be a criminal offence in Queensland after laws passed through State...

IR Act now into law to balance fairness in workplaces

This month marks the beginning of new laws in Queensland that deliver a fairer deal for hundreds of...